My personal experiences with satellite tells me this may not be a universal answer. Cost, speed, and the frustration of data plans make satellite Internet less available and less useful in rural areas than wired services.

I live 20 miles north of Duluth. No wired Internet via DSL, cable, or fiber optic is available in our township. Internet is possible through fairly poor mobile (one cell tower with a weak signal), fixed wireless from the electric cooperative (tower), and satellite via two providers. I used to get Internet from one of those two providers but switched to fixed wireless largely because of cost and reliability. With satellite, the signal can be lost when ice and snow fall on the dish.

Both providers in our area offered plans with speeds of 25 megabits per second with data plans up to 50 gigabytes per month for $129 and $110, respectively. The service reaches us but is very expensive; and latency, upload speeds, and data plans are problematic.

Some friends had to deal with serious illness this past winter, with months of treatment and recovery from surgery. That meant more time working and convalescing from home and up to three people trying to access their satellite Internet at the same time to work via Skype, to connect with family, and to watch Internet movies. Simultaneous use slowed down everyone, and they ran through their “unlimited” monthly data plan halfway through the month; then the satellite service ramped down to effectively block a reasonable connection for a couple of weeks until the data plan renewed.

This situation is not unusual. Multiple users simultaneously using multiple Internet video or other intense systems is common for families with schoolchildren, at family gatherings, for small businesses, and at local community centers. Internet video is becoming very data-intensive, with high-definition video common for gaming and certain software, eating both speed and more and more data. The “Internet of things” is real. Home-based monitoring tools are now common in thermostats, refrigerators, pet minders, medical monitors and more. And that’s on top of telecommuting, video connectivity, music streaming, gaming and other data-intensive activities. Many people use the Internet to access television networks. While 25 megabits per second may be a sufficient speed now, it won’t be long (a year or so?) before it isn’t enough for personal and business use, and cost-effective data plans are inadequate.

Wired systems like DSL and, especially, fiber optic offer far more affordable access to broadband and can be scaled to vastly higher speeds to meet the needs of families and businesses well into the future.

Wired infrastructure is expensive to build, but so was rural electrification. Private-public funding (leveraged by Minnesota broadband grants) and technology partnerships are capable of bringing modern and scalable broadband Internet to everyone, even in rural areas.

With satellite Internet, rural folks are at a great disadvantage, especially where cost, uploads and latency matter. That’s in health care, education, and business operations, as examples. Satellite may not be the short- to medium-term panacea in rural areas.

Like electricity and roads, wired Internet is needed across our state to ensure that everyone in Minnesota will be able to use convenient, affordable, world-class broadband networks that enable us to thrive in our communities into the future.

Jan is active with the Cloquet Valley Internet Initiative.

Grocery stores put “price per ounce/serving” labels on product shelves. It has changed how I shop. Do I always buy the cheapest? No. Not all cookies are the same. But am I better informed? Yes. The National Broadband Plan promised similar tools with their Broadband Speed and Performance Digital Labels but those were based on performance – not cost.

The Minnesota Broadband Coalition has been working on a comparison of broadband pricing based on speed (bit) and data usage (byte). The Coalition is hoping that this information can help people — both consumers and policymakers –make more informed choices. 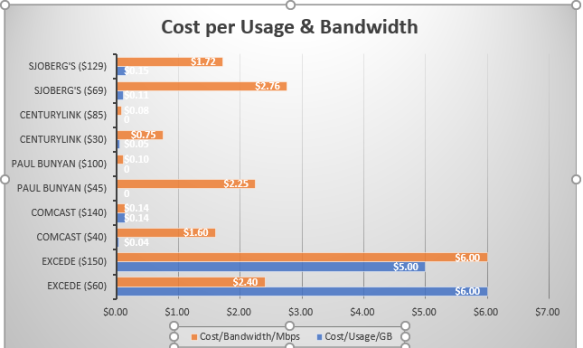 What does this mean?

There are some extreme differences – especially with satellite. You can see that the satellite service is more expensive for both bandwidth (speed) and data usage. The satellite price for data usage, at $5 or $6 per GB (gigabyte) compares unfavorably to the dimes and nickels charged by landline providers. For all providers except satellite, the lower bandwidth services have the highest price per Mbps (megabit per second).  In other words, the more you use, the less you pay per unit. There are two providers have no data cap for their Gigabit service.

Sources now put monthly average household data use at 190 GB (gigabyte) and that number is constantly growing. For rural residents that use data for school, business, health care or other data-heavy activities, it is clear that satellite is an expensive or very limiting broadband option.  It is, however, available everywhere, for those who can afford it.

The Coalition has created a broadband cost analysis spreadsheet that you can use to help calculate the unit cost of your broadband.

Need more? I wrote a longer piece on bits/bytes and average household use in December.

About Blandin on Broadband

Information on broadband use, access, and trends especially in rural Minnesota. Sponsored by the Blandin Foundation and their Broadband Initiative.

Please contact the Blandin Foundation with questions or for further information.