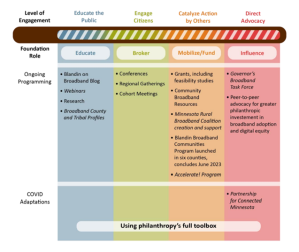 Regularly the Blandin Foundation takes a look at the various communities they have been working with to promote, deploy and use better broadband. They use the Mountain of Accountability Framework as a tool to help learn from the past two years. The graphic to the right gives an overview of the pieces of the assessment.  You can check out the full report to find out how many YouTube subscribers the Blandin Broadband channel has or total amount of grants awarded. But my favorite part is checking in on each of the communities helped – and for sake of archive and brevity of post I’m going to share them each separately:

Le Sueur County has been working with the Foundation on broadband for several years, a connection first sparked in 2018 at a regional broadband summit Blandin helped facilitate for Region 9 Economic Development Commission.
Blandin’s initial support to Le Sueur included grant funding for a Robust Network Feasibility Study and staffing support to move projects forward. An early result of the study was a 2019 DEED Border-to-Border grant for almost $2 million (matched 1:1 locally) to upgrade service to 417 households, 88 farms, 59 businesses, and four anchor institutions (all unserved) in rural areas around the communities of Montgomery, Heidelberg, and New Prague.
This work positioned county broadband champions for a successful BBC effort, focused mainly on communications, public access and training, and addressing broadband-enabled economic development opportunities. The Steering Committee has remained focused on their goal to increase broadband access/adoption/use by implementing projects designed to increase the technical capacity of residents through training and through better high-speed access through public hotspots, loaner devices and advocating more highspeed internet throughout the county.
Le Sueur County maximized the impact of their BBC resources by utilizing CARES funding to implement projects identified through the BBC process. The first project funded in part with the help of CARES dollars sought to improve access to technology throughout the county by increasing the number of public access sites and offering new training
opportunities, with an emphasis on Zoom and similar applications that support community connectivity.
Two other CARES-funded projects were communications focused. One amplified the work of the Le Sueur County Broadband Initiative (LCBI) through enhanced
communication and marketing, including improving access to county-wide calendars, and offering integrated community education classes. A fun component of this project was a Broadband booth at the 2020 Le Sueur County Fair. The booth’s materials, signage, survey, and volunteers generated much discussion and interest in broadband planning efforts around the county. Fair-goers noted and appreciated the brand-new free Wi-Fi on the
fairgrounds, which greatly enhanced their fair-going experience. The second communications-focused project was the purchase of Google Suites for Business for LCBI,
including training for all team members.
In an effort to explain how and why the county spent CARES Act dollars, the impacts of the investments — and assure residents that the County is committed to making
broadband available to all — the team created a video: Le Sueur County: the County that CARES about Broadband. The video premiered in October and so far has been shown at county board and department meetings. It will be posted on the county’s website and shown to townships. Additional segments with emergency services and human services
focuses will be available soon.
Another project addressed the lack of economic development at the county-level. LCBI, in partnership with Southern Minnesota Initiative Fund, hosted a community asset mapping workshop to identify opportunities
for collaboration, and spur innovative ideas across the county – not just in cities – on how to best utilize the unprecedented levels of federal funding expected in the coming months.
The meeting was timely and fruitful, involving over sixty people, including county and township officials, staff from cities across the county, regional intermediary agencies,
business leaders, and educators. Meetings between LCBI and city administrators and elected officials to discuss their capacity for economic development work followed. They
learned that only two cities in the county have full time staff dedicated to economic development. All supported the concept of the county stepping in to support their
economic development work. This culminated with a presentation to the Le Sueur County board in October with a recommendation to hire a county-wide economic development director. The board unanimously supported moving in this direction.
Another project to increase staff support for LCBI fizzled, through no fault of the team.
They had planned to welcome a Lead for Minnesota Fellow to work on broadband in partnership with Tri City School District, but the identified fellow dropped out of the
program. The team continues to work on alternatives.
Between CARES funding and the Fellow not working out, at the time of this writing Le Sueur County has around $50,000 Blandin funds left to allocate. The team is planning a “relaunch” event in December 2021 including a revamp of the steering committee due to changes in personnel in the schools and at the county, bringing in new voices. They anticipate communications continuing to be a major focus moving ahead. They anticipate completing their BBC work in 2022.

Side bar:
Impact of the Rural Digital Opportunity Fund (RDOF)
The Rural Digital Opportunity Fund is an FCC program designed to bring high-speed fixed broadband service to rural homes and small businesses that lack it. The Phase
I reverse auction ended on November 25, 2020 and winners committed to bring broadband to over five million homes and businesses in census blocks that were entirely unserved by voice and broadband with download speeds of at least 25 Mbps. The FCC is currently in the process of going through long-form applications and making final award decisions. Once formally awarded, winning providers have
six years to complete the projects.
One wireless provider won over three quarters of the over $400 million awarded to Minnesota in the auction phase. The FCC is still considering whether to approve their long-form application.
This has left large swaths of the state in a holding pattern, including Le Sueur County. LCBI team leader Barbara Dröher Kline has been a vocal advocate for communities affected by the uncertainty of the RDOF auction. She spoke with MinnPost in January 2021:
Barbara Dröher Kline, a broadband consultant working with Le Sueur County, said the county had applications rejected by the state for two broadband projects for
roughly 500 homes in areas that could potentially be served by LTD. Both are next to parts of the county where the county and other partners built fiber infrastructure with $547,000 from the federal stimulus CARES Act.
Dröher Kline said about two-thirds of eligible areas in Le Sueur County are now covered by LTD’s winning bids, which means they may get broadband, but it also
may take years. She suggested the state ask the feds to withdraw RDOF funding in areas where the state program can build infrastructure quickly. “It would have been a drop in the bucket (for LTD) and we’d have fiber in the ground this spring,” Droher Kline said.
As of November 2021, the final award decision has still not been made, and communities wait. Barbara laments, “If feels like we’re going backward.”