Today the Minnesota Broadband Coalition met. They spoke about what’s been happening with the Legislature (no broadband funding, but exposure) and what they are working on for next year. Top priorities are to get funding for the grants (in base budget) and funding for the Office of Broadband Development.

As predicted last week by a MN Broadband Task Force member, providers being forced to look at whether they will enter a market, now slated for LTD development.

A Coalition member mentioned a potential loop hole inherent in the RDOF process.  Specifically, RDOF grants have been announced but not awarded. Grants are announced based on an applicant’s short form applications; Grants will be awarded based on whether their long forms are accepted.

The Office of Broadband Develop seems to have two choices – act as if they funds have been awarded or move forward as if they haven’t. Large swaths of unserved areas in Minnesota are in LTD proposed coverage areas. (Note blue areas in map at left below – and compare that to the map on the right, which show unserved areas in pink and served areas in green).

The RODF grants for LTD span 10 years, which means there’s the potential to put many communities in a waiting room unless/until they get coverage from LTD. But right now there’s an opportunity to help the communities who have potentially winning Minnesota grant applications.

Based on input from members, the Coalition is going to ask the OBD to move forward with grants without regard to RDOF.

Here are more complete notes on the meeting:

Part of the meeting was strategic planning, I have very high level notes on that portion… 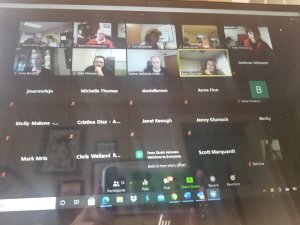 Coalition members find they have a unified voice asking for unified action.

Top Activities for the Coalition:

I took more complete notes on the business portion of the meeting. I haven’t recorded the meetings in the past; so I didn’t today either. They record the meetings; I don’t know if they make those archives available…

Notes from Office of Broadband Development aka Discussion on RDOF

Financial – I don’t take many notes except to say that they are always looking for new members.

Should the Coalition make a statement on RDOF to DEED et all?