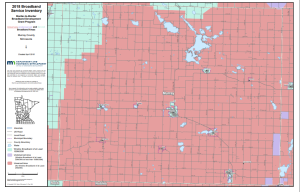 Murray County broadband ranking has improved from 53 to 51. It looks like all of the expansion has happened at the 100/20 speeds so while the increase in not big, it is building for the future.

The studies looked at the business plan for bringing fiber to the service area. The vast majority of the study area has (or will soon have) fixed wireless broadband. This technology can deliver broadband connections in the range of 25 Mbps download, and sometimes faster.

However, we know the county’s goal is to eventually have fiber everywhere and the current wireless broadband is not a permanent bandwidth solution. Broadband trends show that the amount of bandwidth needed by a typical home will keep growing, and at some time in the future these wireless networks will seem too slow and become obsolete in the same manner that has happened in the past with dial-up and DSL broadband.

Our analysis shows that it is not economically feasible to build fiber everywhere in the rural parts of the county using the existing Border-to-Border grant program—the 50% grant matching in that program is not high enough to create a sustainable network. However, it would be possible to fund fiber using these grants if the percent of the grant matching is increased above the 50% level used in awarding these grants today. It might also be feasible to build the fiber in stages over multiple years to get the needed grant funding.

It is likely to be a challenge for a service provider to building fiber today since almost all of the rural area is served with newly-built fixed wireless technology that is capable of delivering speeds of at least 25 Mbps download. Any potential fiber provider is going to worry that many households will be satisfied with that level of broadband speed.

“The county does not plan to build a broadband network but is open to talking with providers who are interested in extending service to our citizens and may need financial assistance to do so,” Rucker said. “Murray County had the feasibility study completed so that any provider who wants to extend broadband service to our unserved and underserved areas could use the study as background to apply for state or federal grants to do so.”

The county has seen significant broadband investment from Woodstock since 2015, when it installed two wireless broadband towers around Lake Shetek. It continued over the last two years, installing eight internet coverage sites in the area, including towers in Lake Wilson, Slayton and Edgerton. The company plans to add another tower south of Chandler this year.

The towers, which are fed with fiber, provide 50Mbps download speeds at a range of six miles, according to Terry Nelson, Woodstock general manager. The speeds and service can vary, however, as wireless internet can be disrupted by geographical features such as hills, trees and windmills.

“We’ve done wireless in a lot of these areas, but there’s still little pockets that we can’t hit with some of our wireless,” Nelson said. “I would definitely never say the county is 100 percent covered, because it’s not.”

There’s a push for use in the schools…

Through a partnership between SDN Communications and the Southwest West Central (SWWC) Service Cooperative, a fiber-based internet service will come to more than 30 school districts in southwest Minnesota, including every public school district in Nobles, Murray, Rock, Cottonwood and Pipestone counties.