More than 60 people came to show support for the Broadband Day on the Hill hosted by the Minnesota Rural Broadband Coalition, a coalition of more than 70 organization. The main tenet – to encourage legislators to support continued funding for the Minnesota Border to Border Broadband grants. They are recommending $51.4 million and bipartisan bills in support of the same are been introduced in the House and the Senate.

Members gathered to hear from policymakers. They went to talk with their representatives. And many were able to testify at the  MN House Job Growth and Energy Committee Hearing addressing broadband bills (HF3527) – the bill for broadband funding. They also heard HF4180, a bill to make satellite eligible to receive broadband grants.

I tried to capture as much video as I could. (Video on the Committee video is available in a separate post.) There were issues with connectivity in the basement where we met. So there’s a decent video of the first 20 minutes and then I think we can most kindly say audio from the rest of the meeting.

Welcome from Nancy Hoffman, Chair of the MN Broadband Coalition: “I’ve been banging the #mnbroadband drum for a long time. I started to feel like we were getting somewhere with the Broadband grants. They are getting us connected. We need them to continue.”

Tips from Judy Erickson, lobbyist: We are looking for $51 million for better #mnbroadband – we have bipartisan support” WE will know in the next few days what numbers the legislature will be working with.

Other bills have been introduced – but today isn’t the day to diverge. 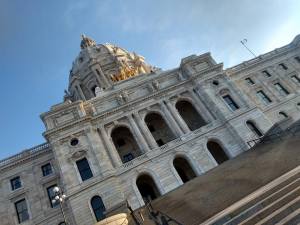 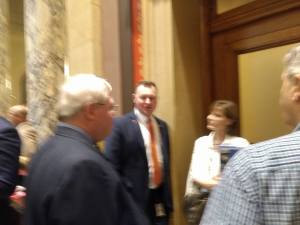 Update on 2017 Broadband Task Force Report – Margaret Anderson Kelliher, Chair, Governor’s Task Force on Broadband
This may be an important opportunity to help educate legislators – Coalition member are in a good position
I want no kid to grow up without equitable access to education and opportunity and that means #mnbroadband

Legislative Discussion with Sen. Mark Koran (R-North Branch)
“We will not get people to move to our area without #mnbroadband” Our businesses need this. It’s unacceptable that some areas don’t have access.

Sen. Erik Simonsen (DFL-Duluth)
Being from Duluth, I have had service for a while. But I realized that not far out of town they didn’t have access.
There’s a push to embrace satellite and some wireless technologies. WE have to remember that those technologies need a solid infrastructure.

Rep. Sandy Layman (R-Cohasset)
My background is economic development so I’ve been interested in broadband for a long time. We knew about broadband in Itasca County – but we didn’t have it. So we created opportunities through technology centers. I worked with the Blandin Foundation; they have been instrumental in helping raise awareness of the issues and help the state recognize the needs.
I’ve been surprised at the roadblocks I’ve encountered especially in terms of thinking the job was done, thinking satellite would be sufficient.
There will be money for broadband – because so many rural voices have been raised. You say it’s important; we hear you say it.

Rep. Rob Ecklund (R-International Falls)
It’s great to hear from constituents.
We can’t run two computers on my home network because our connectivity is so bad. I have fiber near my house but I can’t access it.
Satellite is answer – but when I called them to ask about service they told me that if I was used to DSL, I wouldn’t be happy with their service.

Question – how do you think this will play out?
Koran – I’m a fan of the cooperatives. Also we need to look at programs for the communities. We need to look at the environment when the provider is unwilling to work with the community – especially when that provider may be getting CAF 2 funding. We need to see larger scale projects – allow counties/regions to work together.

Doing nothing is not an option.

“I’m a clerk for our township. I can’t pay taxes from my office in town.” Is there a policy in place to help get broadband done?

Simonson There’s no policy in this bill – because that complicates it. There will come a time when we need to talk about what policy will look like for the next 5-6 years. Some providers may balk. We need to get everyone to the table to work it out. And we can’t expect the homeowners of one area to bear the brunt of the expense. It needs to be a statewide solution.

Koran – we have a statewide plan. We need to get counties to work down. I’m frustrated with the CAF 2 policies. The lack of transparency is frustrating and then we can’t be assured that they speeds will be sufficient.

Ecklund – I have three towns that are an island of no-service in a see of service. They are looking at forming a cooperative to serve the area. They go to school in Duluth and can’t do their homework at home. YOU folks have advocates around the Capitol- League of MN Cities and others

Question from Fred Underwood – how do I best communicate with the legislatures don’t understand that none of their top issues will be addressed without broadband?

The broadband is the underpinning infrastructure that makes everything work in modern life.

Question – could this be regulated by the PUC?
The providers have slowed some growth hoping the government money would help pay for the last mile.

Question – why is there so much opposition?
There’s no opposition to cooperatives. Cooperatives have received funding from stat grants.

Ecklund – we’re a decade behind and fighting to keep there. We need to fight for our future

Community Broadband Bits is recommended listening – especially for those of us who spend a lot of time in our cars.