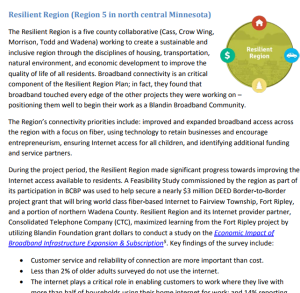 The Resilient Region is a five county collaborative (Cass, Crow Wing, Morrison, Todd and Wadena) working to create a sustainable and inclusive region through the disciplines of housing, transportation, natural environment, and economic development to improve the quality of life of all residents. Broadband connectivity is an critical component of the Resilient Region Plan; in fact, they found that broadband touched every edge of the other projects they were working on – positioning them well to begin their work as a Blandin Broadband Community.

The Region’s connectivity priorities include: improved and expanded broadband access across the region with a focus on fiber, using technology to retain businesses and encourage entrepreneurism, ensuring Internet access for all children, and identifying additional funding and service partners.

During the project period, the Resilient Region made significant progress towards improving the Internet access available to residents. A Feasibility Study commissioned by the region as part of its participation in BCBP was used to help secure a nearly $3 million DEED Border-to-Border project grant that will bring world class fiber-based Internet to Fairview Township, Fort Ripley, and a portion of northern Wadena County. Resilient Region and its Internet provider partner, Consolidated Telephone Company (CTC), maximized learning from the Fort Ripley project by utilizing Blandin Foundation grant dollars to conduct a study on the Economic Impact of Broadband Infrastructure Expansion & Subscription. Key findings of the survey include:

These study findings were shared with the Governor’s Broadband Task Force and elected officials.

Using technology to improve learning was another priority for the Steering Committee. One of the Blandin grants was used to purchase SMART boards which are enhancing educational opportunities for the youngest learners in ISD 181 Brainerd Public Schools. Eight teachers were trained on the use of the four SMART boards and projectors that were installed for the Early Childhood Family Education program.

For a more recent look at Cass, Crow Wing, Morrison, Todd and Wadena Counties – check out the county profiles I did earlier this year.