The FCC  just released information on their upcoming reverse auction. The idea is that broadcasters will relinquish spectrum and mobile broadband providers will buy that spectrum. Both sides bid at the opportunity. The FCC will use those bids to determine prices, winners and losers. (Here’s a better, more detailed description.)

Parts of Minnesota (see map) are included in the reserve auc 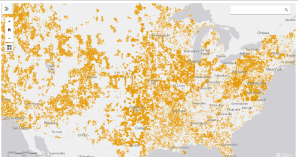 Here’s the FCC press releases on the opportunity…

WASHINGTON, February23, 2017–Continuing its push to expand access to broadband in rural America, the Federal Communications Commission today set key rules for a competitive “reverse auction” that will provide nearly $2 billion for rural deployment over the next decade.

In the upcoming Connect America Fund Phase II auction, providers will compete for support to expand broadband to unserved areas, along with voice service. The auction rules established today aim to maximize the value the American people will receive for the Connect America Fund dollars spent by balancing deployment of higher-quality services with cost efficiencies. Broadband access is essential in the 21st Century for jobs, education, information and economic development. Since 2011, the FCC has been working to expand access in rural areas where deployment costs are high by providing support from the Connect America Fund.

 Establishes bidding weights to compare bids across performance tiers set last year (see 2016 press release at  https://apps.fcc.gov/edocs_public/attachmatch/DOC339550A1.docx)  These weights account for the value of higher speeds, higher usage allowances, and low latency  But the formula used to rank bidders balances these performance goals with the need to reach as many consumers as possible within the FCC’s budget for rural universal service support

The item builds on the substantial progress the FCC has made in recent years connecting rural America to broadband. In 2015, pricecap carriers accepted $9 billion over six years from Phase II

of the Connect America Fund to expand broadband in their rural service areas. And in March of 2016, the FCC reformed its broadband support for the nation’s smallest carriers, known as “rateof-return” carriers, providing $20 billion over the next decade.

Next steps for the Phase II auction include seeking comment on auction mechanics. After consideration of the record developed, the FCC will vote on finalauction details and set specific deadlines and dates.

Other resources: Preliminary map of areas eligible for the Phase II auction. https://www.fcc.gov/reports-research/maps/caf-2-auction-preliminary-areas/