Kanabec is a Blandin Broadband Community. There is a Kanabec Broadband Initiative. They have been part of the East Central Regional Broadband Group.

In December 2016, the Kanabec County Times outlined some of the options and proposed options in the county. Here are the highlights:

Midcontinent Communications advertises up to 200 Mbps down / 20 Mbps up, but not outside the city limits of Mora and Ogilvie right now. Midco says it will launch Gigabit service sometime in 2017. Great news for those areas.

CenturyLink is making upgrades. (Kanabec County is in line to receive $2,057,245 in CAF 2 funding to upgrade 4,966 locations. ) Based on the article, it sounds like CenturyLink may be talking about fiber to the node – not to the premise…

“That’s Century Link’s new fiber-optic installation, one of the main technological ingredients that will allow homes to experience a more reasonable connection. Then again, you have to define the words reasonable and fast. Century Link will offer speeds of “at least 10 Mbps (megabits per second) download and 1 Mbps upload to locations in FCC-designated, high-cost census blocks.” While that bandwidth will be a huge improvement for those with no wired internet options, it’s still below the FCC’s definition of broadband which is 25Mbps download / 3Mbps upload.”

For the rest of Kanabec County, internet options are limited to the choice of one cable provider or satellite. On the outskirts of Ogilvie, for instance, some homes are nowhere near cable connections, leaving residents with expensive options. One satellite provider locally offers up to 12 Mbps download speed for $150/month. Plus there’s inherent latency (delay) with satellite. Customers in these underserved areas may also spend $100-$200 a month on cell phone data to operate from a hot spot.

The Office of Broadband Development released data on broadband covered in fall of 2016, based on information gathered in July 2016. Here’s how Kanabec County ranked: 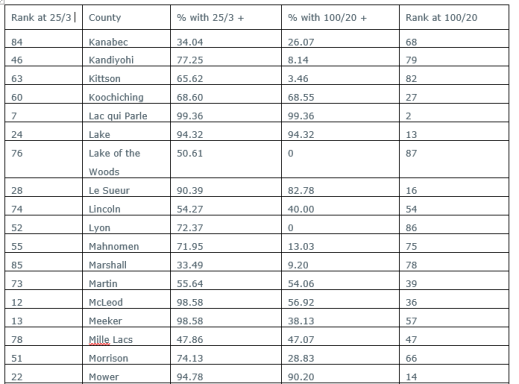 Mississippi State University Extension have come up with a ranking system to gauge the digital divide index (DDI) by county. (The lower the number the better – the state average is 40.66.) Here’s how Kanabec ranked: