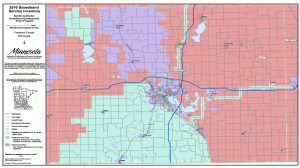 Most recently BEVCOMM got $150,700 for a project that will serve 10 unserved households, six unserved businesses, nine underserved households and six underserved businesses in the rural Freeborn area in Freeborn County. The Cannon Valley Telecom project will improve access to health care and education. The total eligible project cost is $376,750, with a $226,050 local match.

In 2015, BEVCOMM got 149,625 to build out broadband infrastructure to provide high-speed Internet service to 43 households and one business in rural Freeborn in south-central Minnesota’s Freeborn County. Total project costs are $393,750. BEVCOMM will cover the remaining $244,125 (62 percent local match).

Freeborn County is also in line to receive $934,480 in CAF 2 funding to upgrade 1,295 locations. Unfortunately CAF 2 recipients are only required to upgrade to 10/1 access. Many may choose to upgrade to better speeds but there are no requirements.

The community has been vocal in their support of broadband funding. A year ago (Jan 2016) the Albert Lea Tribune had this to say about broadband…

Internet is becoming something that is not only a helpful tool, but a necessity — at least for our business.
We imagine we are not the only business in Freeborn County that relies on the Internet for much of its operations.

The Office of Broadband Development released data on broadband covered in fall of 2016, based on information gathered in July 2016. Here’s how Freeborn County ranked:

Mississippi State University Extension have come up with a ranking system to gauge the digital divide index (DDI) by county. (The lower the number the better – the state average is 40.66.) Here’s how Freeborn ranked: