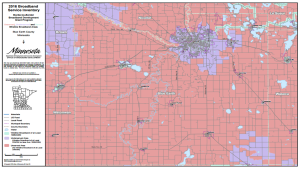 Blue Earth’s numbers today are not terrible, They rank 29 out of 87. The percentage of the population with access to 25/3 (Mbps down/up) speeds is almost 90 percent. But the percentage of access to 100/20 – the speed goal for 2026 is 55 percent. Looking back at the coverage they had in 2014, the situation remains the same  coverage around Mankato meets the speed goals for today but outside the city, the coverage doesn’t even hit 25/3 standards.

Blue Earth has not received State grants. They were not part of an ARRA project. They are in line for $2,422,876 in CAF 2 funding to upgrade 3,934 locations. That is quite a bit of money. Unfortunately CAF 2 recipients are only required to upgrade to 10/1 access. Many may choose to upgrade to better speeds but there are no requirements.

The Office of Broadband Development released data on broadband covered in fall of 2016, based on information gathered in July 2016. Here’s how Blue Earth ranked: 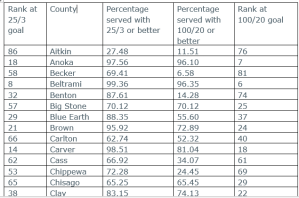 Mississippi State University Extension have come up with a ranking system to gauge the digital divide index (DDI) by county. (The lower the number the better – the state average is 40.66.) Here’s how Blue Earth ranked: