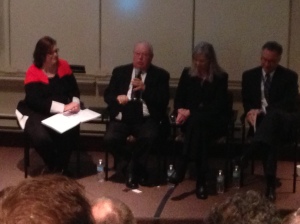 Today I attended the Discussion of the Governor’s Task Force report hosted by the Minnesota High Tech Association. The theme of the morning – we need to do more to reach the 2015 broadband goals. I thought there were some good questions too.

Public-private partnership came up a lot. It always does. I feel like a couple of things were said that aren’t always said.

I  tried to take notes throughout the session…

Kids are getting used to being online at all times. Even the Vikings have had to recognize the importance of the network. (In terms of where they can and cannot move!)

The Legislature set high, ubiquitous goals for statewide broadband access. To help get there we’ve created a Task Force. We’ve made some progress but have a distance to go. The Legislature will be looking at the report. The economics are difficult so public-private partnership is essential.

Rep Sheldon Johnson will be taking on Telecom issues. It’s been good to get a chance to talk to him.

Broadband penetration is a big issue. What will it look like five years from now? We need to figure out the business plan for each of us and for the state. What is the State’s role to help build out broadband for all Minnesotans?

It’s not just infrastructure – although it’s as key as roads – but adoption and literacy are big issues as well. Adoption, access and literacy will drive demand and help all of us get to our goals.

Maps are updated twice a year. We work with 128 out of 129 providers in Minnesota.

The Task Force meetings are open to everyone. Public comments are welcome. Please take the opportunity to come talk to us if you have something you’d like to say.

We have been agnostic about what technologies can get us to our goals.

We’re not in the telecommunications arena; we’re involved in quality of life.

VT ranks fifth for broadband availability and speed. Minnesota isn’t on the list. We need policymakers to adopt this initiation to move it forward. We will all benefit from it.

Applications being developed today are going to require better broadband. In Winona, we are developing a technology that will be of great use to rural Minnesota.

I bring the voice of the very rural community to the table. In 1995, I was working to get toll free dialup access for the area (Grand Marais). I have worked with IRRR in the past to highlight technology. Currently working with Blandin foundation to work with communities and leaders understand the importance of broadband.

People in the communities are getting depressed. They are worried that it will be decades before some areas get broadband if we stay on the track we are currently on.

I am passionate about access in rural areas. I think having the maps have been important. Real data spurs action. The county by county maps are platforms for discussion. The tools being created are valuable.

We need to watch for projections from federal investment.

I am optimistic about the streamlining of regulations such as permitting processes. It makes it easier for businesses to build out. Arizona is doing some good work with combining broadband and road infrastructure. State trails in Michigan are being used for conduit.

CenturyLink started as a rural carrier. 96% of Minnesota has some sort of access. Reaching the last 4 percent will require public-private partnership. We need to figure out how to get to that last 4 percent.

Reaching the faster speed goals will be tough too.

We need to discuss availability with adoption. 96% of people have access yet only 73% use it. We have a deal for affordable laptops. And we offer some training to try to closer the gap. I wonder what this crowd thinks will help close that gap.

CenturyLInk is about to get $11 million to help serve unserved areas – but there’s more money of the table that folks didn’t go after. Perhaps the requirements were too stringent. CAF II might have $300 million – it’s important for us to know how to avail ourselves of the money and use it to close the gap.

Some people are disappointed with our report. We recognized that we won’t make out goals without intervention. We need to note that. Some intervention is financial – we need incentives to promote public-private partnerships. Some is policy.

Questions from the Audience:

How can we make it easier for businesses to get to unserved areas?

DR: We are eventually going to need financial support to reach the most remote areas.

GE: Leverage is going to be the key. In 2 weeks Minnesotans will be trying to work with the RUS to recognize that we need some changes. Broadband creates healthcare solutions – priorities dictates that broadband be more important.

What about cost in Minnesota?

MAK: We have been traveling around the state to introduce people to the importance of broadband. We have created county brochures to promote local provides and low cost providers. CenturyLink and Comcast have low cost options. PCs for People have options for low cost computers. Often the equipment cost is the largest hurdle.

GE: The task force offered two options for cost 1) scholarships dollars for students and 2) public access computers in libraries. Affordability is also a matter of priority. When the product becomes essential the relative cost will go down.

DR: Comcast has a program too. We should have offered something like that sooner.

The report talks about government involvement. Does that mean local?

DM: Yes it does mean local, state and federal government. We are still looking for the best models. Our community voted to support broadband with sales tax dollars. We’ll see how it works.

MAK: County and city leaders could get good examples from the report. Otto Doll came to talk to us about the Minneapolis technology survey. Sometimes training focuses on very low skills. The Mpls survey indicated that people need training on higher level tasks too – such as applying for a job online. Not having that skill and being limited by 30 minute stints at the library will keep people on the far end of the digital divide.

How can we convince providers to expand their service? What prevents growth?

DR: All providers want more customers. It’s what we think about. How do you get a ROI? There’s nothing available now that makes a compelling business case in some areas. We’ve looked at various technologies. We will need a hybrid solution to reach unserved areas.

MAK: We started to look at wireless access in the last two months. But it’s hard to apply for a job on your smart phone. What are the drawbacks of other options?

GE: It’s going to take a combination of technologies to solve this. But there is a wired component to all technologies. Fiber and wireless will be a likely first solution to reach remote customers.

It’s been tough to get larger providers to look at public-private partnerships. Why?

GE: Sometimes rules, regulations based on Minnesota nice get in the way. In VT there are lots of ways for municipalities to help providers to do the work. For example, sometimes franchise fees can be forgiven. In Minnesota, that can’t happen.

DR: We struggle when public investment over builds on our network. Building totally unserved areas is one thing – but when we have infrastructure we don’t’ understand building more.

Satellite delivery of broadband improving – what is the option of using it?

MAK: We heard about the challenges of satellite at the meetings. The tree line in Minnesota is an issue. Many different solutions for different topographies will come into play.

What policies can we make to promote broadband?

MAK: In AZ they defined the transmission of information as part of the job of the Department of Transportation. We think broadband is as important as water. Other states are doing this.

MAK: Duluth tried very hard to be a Google city. But the lessons they learned are starting to pay off.

GE: Minnesota nice equation fits here. There is as much public money in that project as private funding – with things like franchise fee forgiveness. We need to look at what sort of incentives would attract businesses.

DM: We need new thinking for all levels of government. Local governments need to recognize they cards they o hold.

DR: Google ran into problems with getting Gigabit modems. How will that drive technology in the consumer home? Consumption of broadband will grow. KC has high population density.

MAK: The State recently updated disaster recovery. With the recently flooding in Duluth we saw the opportunity to build broadband when building other infrastructure. Maybe the disaster statute could more clearly consider broadband.

Task Force will meet at the Dep of Transportation Building Jan 29.