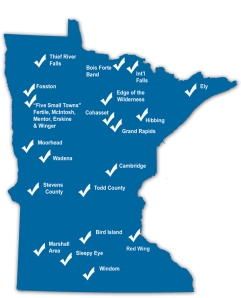 The FCC published their Sixth Annual Broadband Report, unveiling both a new definition of broadband (4 Mbps upstream/1 Mbps downstream) and their list of Minnesota’s least served counties. http://tinyurl.com/3xhlaup Their list bears little resemblance to the list compiled by the Minnesota Ultra High Speed Task Force last fall. The recommendations set out by the Task Force became laws last spring and took effect as the Minnesota Broadband Bill on August 1, 2010. http://tinyurl.com/24jevr9

(If your favorite candidate has also mentioned broadband, please let us know. We like to highlight any and all mentions of broadband.)

This year’s Blandin Broadband Conference spotlights communities across Minnesota that are Cultivating a Culture of Use through ARRA broadband funding. Come hear from experts, researchers, students and folks in the field who are creating programs to help boost broadband use in their communities. There will be time and space for attendees to ask questions and tell their stories, and follow up on the work of the Minnesota Ultra High-Speed Broadband Taskforce to answer the question, “Where are we now – one year later?” Geek Squad founder, Robert Stephens will be the keynote speaker. http://tinyurl.com/2dan72h

Anoka County
Connect Anoka County, a partnership of Anoka County and Zayo Bandwidth, announced it has been awarded $13,382,593 from the American Recovery and Reinvestment Act (ARRA), to expand fiber broadband connectivity across the county. http://tinyurl.com/28a4c8u

Eveleth and Sebeka
CNN writes a story on rural-sourcing, highlighting a CrossUSA, a Minnesota business with offices in Eveleth and Sebeka that provides offsite IT consulting. http://tinyurl.com/2eqsmdy

Grand Rapids
The Grand Rapids Chamber is working with the local Depot Commons Association to create a shared professional workspace (or co-working space) for business professionals. Co-workers will receive access to a reliable office space with a unique modern community of professionals. http://tinyurl.com/28d9ahf

Minneapolis
MedMinder provides a “computerized pillbox” to remind ailing parents to make medication in Minneapolis and so that adult children living around the world can keep tabs on their healthcare. http://tinyurl.com/262pzf6

In June, Minneapolis lit up 117 free Wi-Fi spots throughout the city. Twin Cities Daily Planet reporter finds that some spots are more accessible than others. http://tinyurl.com/2er9boj

Sibley and Renville Counties
Blandin Foundation awards $40,000 to help seven cities in Sibley County and one city in Renville County with a study to investigate the feasibility of a Fiber to The Home (FTTH) network. http://tinyurl.com/26n7bn2

(Many stories are gathered from local online newspaper. Unfortunately each newspaper has a different policy in regards to archive news and therefore we cannot guarantee access to all articles cited.)

Coming home from a week’s vacation can be comforting – welcomed by your own dog, sleeping in your own bed, and opening your own refrigerator are some of my indicators of being home. After this past week, I can add one more item to my list – logging on through my own Internet connection. It turns out that northern California is similar to Minnesota in many ways.

I experienced the full range of connectivity options over the past week – from cable modems and 3G cell coverage to no broadband and no cell service. The quality of connection availability was predictable – excellent in urban and suburban settings, worse in the mountains and countryside. I was a bit surprised at the lack of broadband availability at the house that I rented with friends in Tahoe City. Our landlord/host, producer of a PBS travel series, uses an air card for his broadband connection with no Wi-Fi at the house.

I also faced the usual tension between being on vacation and keeping up with work. It was difficult to not take a regular look at the Blackberry and to click away a few email responses. I was successful at holding the line at just reading email and not reading and creating documents. That seemed like a good idea last week…today, I am not so sure!