Mille Lacs Reservation has seen some success in deploying better broadband in the last year. They went from 60 percent access to speeds of 100 Mbps down and 20 up to 72 percent; and access to 25/3 went from almost 60 percent to almost 76.

In 2015, Mille Lacs County developed a broadband feasibility study that included a brief statement on connectivity on the reservation…

The Mille Lacs Band of Ojibwe have constructed fiber connecting their casino, their main headquarters, and some of their other businesses. They buy bandwidth from the local cable company and are satisfied with the bandwidth they can get. They operate businesses outside of that fiber network for which they cannot get good bandwidth.

In April 2021, Mille Lacs Tribal Economy started working with the Blandin Foundation on a 15-week course of study and education about broadband for a community team. (The Mille Lacs Tribal Economy encompasses the three districts of the Mille Lacs Band of Ojibwe territory.) The video below speaks specifically about the spotty nature of broadband in some parts of the community – as well as hope that providers will build in the area with federal funds.

In October 2021, the Tribal Economy received $6,670 from the Initiative Foundation for  a 12-month case study on broadband services and experiences among the Mille Lacs Band of Ojibwe districts. 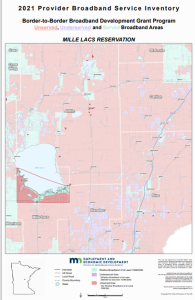 I am doing the annual look at broadband in tribal areas – based on maps from the Office of Broadband Development and news gathered from the last year. I’m looking at progress toward the 2022 (25 Mbps down and 3 Mbps up) and 2026 (100 Mbps down and 20 Mbps up) and will code each: