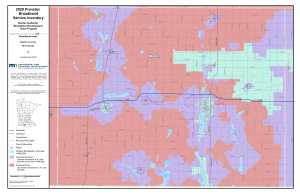 Annually, Blandin Foundation pulls together data from the Minnesota Office of Broadband Development and broadband news to gauge progress toward the state broadband goals (25 megabits per second download/3 Mbps upload by 2022 and 100 Mbps/20 Mbps by 2026). Leaders can use this information to improve broadband access and use in their communities. To see how the state is doing overall, or to compare counties, visit the Blandin Foundation interactive map. Or check out past years’ reports: 2017, 2018, 2019 and 2020.

Martin County has seen an increase in broadband coverage in the last year, yet a slip in ranking, which means they are improving but not as fast as other counties. They will see improvements based on a recent MN Border to Border grant award. And the county was named a Telecommuter Forward, which indicates an interest in broadband use and deployment.

What we learned in the past:

Martin County was a 2015-2016 Blandin Broadband Community  and through that partnership they had a feasibility study done in 2017.

Martin County will benefit from a Border to Border grant awarded in the last round:

Martin County was names a Telecommuter Forward community, which indicates an interest in promoting access and adoption.