The historical numbers for Freeborn County are unreliable. The numbers from 2017 reflect wireless connections and the more recent don’t but the difference seems to reflect more than that. It is clear that they will need a concerted effort to meet the 2022 and 2026 goals. 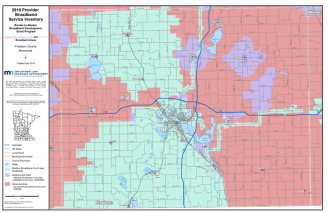 Freeborn is also getting almost $2 million in FCC funding but that is over the next 10 years.