Fillmore County is not poised to meet either the 2022 or 2026 state speed goals. Their improvements over the years have been very incremental and not at pace with other counties. 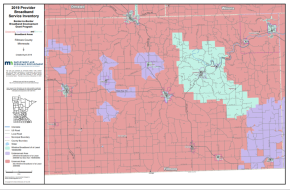 In December, Mediacom announced completion of their project, because the maps and data were collected in December, it’s difficult to know whether those households were included in the most recent numbers.

Fillmore County could benefit from future grants. In 2019, MiBroadband applied to upgrade service in Fillmore. (That doesn’t mean they will get the grant; they have only applied.)