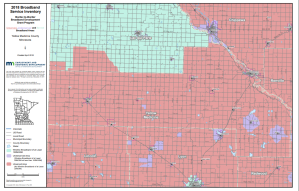 Yellow Medicine broadband ranking bumped up from 71 to 69.

The primary purpose of the study was to determine the breakeven penetration level for each scenario. This represents the number of customers necessary for the scenario to always remain cash positive throughout the life of the financing. This analysis told us the following:

It does not look to be economically feasible to immediately build fiber everywhere without significant grant funding. This is not a surprising finding and is directly the result of the high cost of building fiber to farms.

* The wireless network designed by Finley is intended to supply at least 25 Mbps download to rural homes in the county, which is a significant improvement for those homes with no broadband. Some customers will be able to get speeds faster than that on the wireless network.

However, implementing a wireless network would not be a permanent solution. All of the broadband trends in the country show that the amount of bandwidth needed by a typical home will keep growing, and at some point in the future the wireless network will become obsolete in the same manner that happened in the past with dial-up and DSL broadband.

The report discusses the next steps the county needs to take after digesting the results of this study. These include such things as looking for a partner to bring broadband to those areas without it today. The goal would be to have a partner by next year to hopefully be ready for future state grant funds.

We note that as this report was being written that the county announced a tentative agreement with Farmers Mutual Cooperative to bring fiber to a significant portion of the county. The county has agreed to provide $4 million in funding subject to the Cooperative being able to find grants and other funding needed to build the project. If completed this project would cover a little less than half of the parts of the county that don’t have broadband today.

It’s worth noting that Yellow Medicine and Farmers did not receive that grant. There were opinions on that feasibility study and public meetings were held. They were also part of an informal but informative speed test for locations in the area that demonstrated the uneven access available.

Mediacom has announced upgrades to the Gig program in Granite Falls. AT&T announced investments in the area.