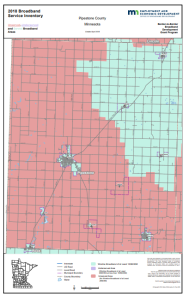 Pipestone County broadband ranking has improved from 51 to 22. All of the improvement has happened in the 100/20 speeds.

Fiber optic cable is going in the ground between Edgerton and a communications tower northeast of Trosky as part of Woodstock Communications’ effort to expand internet service in the county.
The tower near Trosky is one of two existing towers the company plans to lease space on and connect fiber to as part of its effort to bring high-speed internet service to unserved parts of Pipestone County with a hybrid fiber-wireless system. The other tower is north of Pipestone.
Woodstock Communications also plans to build two new communications towers — one in Altona Township and one in Eden Township — that it will use to transmit wireless internet service. The towers are expected to provide broadband service within a six-mile radius.

Woodstock received a $363,000 state grant to improve access in the area…

Last year, Murray County and Pipestone County partnered with four other southwest Minnesota counties and the Blandin Foundation to conduct feasibility studies — also done by Finley and CCG — in hopes of getting a similar outcome.

Here’s a look at what the feasibility study says…

It looks more feasible to provide wireless broadband to the study area. We know that is not the result the county was hoping for, but the Finley analysis provides for a fiber-fed wireless network that can provide speeds of at least 25 Mbps download to rural homes in the county. That would solve the immediate crisis for homes with no broadband. However, once built, the county will have to continue to push in the future to eventually get the network converted over to fiber.

The county is also benefiting from investment from AT&T and a Gig upgrade through Mediacom to parts of the count (Pipestone and Trosky).

The county has reason to want better broadband. The school is getting better connected…

Through a partnership between SDN Communications and the Southwest West Central (SWWC) Service Cooperative, a fiber-based internet service will come to more than 30 school districts in southwest Minnesota, including every public school district in Nobles, Murray, Rock, Cottonwood and Pipestone counties.

And they know they need better for telehealth…

“In a rural setting as a physician you feel like you’re on an island and don’t have the resources available and with our telecommunications system, it’s never like that,” he said.
He said they’re in good shape with broadband at PCMC, but other facilities across the Avera system don’t have the same access which creates barriers. Klobuchar said they included $600 million in the federal budget to address rural broadband issues, money that “trickles through from the states,” she said, and must also reach the agricultural industry.
“Ag, more and more, precision agriculture, is using broadband,” she said.