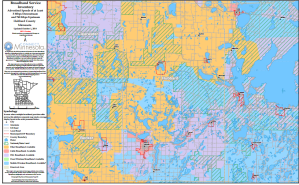 For the upcoming weeks I’m working on a County-by-County look at the State of Broadband in MN. My hope is to feature a county a day (in alphabetical order). In November, Connect Minnesota released their final report on broadband availability. Here is how Houston County stacked up:

Hubbard County has been vocal about their need for better broadband. In 2012, the Executive Director of Hubbard County Regional Economic Development Commission expressed concern saying, “Approximately 4,000 homes and businesses within the Park Rapids (MN) phone exchange currently are not served, and have to rely on satellite or dial up service. These options are unacceptable.” They had been working with Paul Bunyan Communications to expand broadband to those areas but efforts were thwarted when the FCC reformed Universal Service Funds, making the business case more difficult for the provider. Fast forward three years and it looks like good news may be on the way – Park Rapids and other parts of Hubbard County are on the short list to become GigaZones through Paul Bunyan as early as March 2015. Great news for the area!

And maybe this is a promising story for other communities that are dealing with dialup and satellite services.

My hope is that these county-specific posts will help policy makers and county residents understand where they stand in terms of broadband access. Assuming it might get forwarded to folks who don’t eat and sleep broadband I wanted to provide a little background on broadband to help set the stage…

How does Minnesota define broadband?

The 2015 broadband goal for Minnesota is ubiquitous access to speeds of 10-20 Mbps (down) and 5-10 Mbps (up). These numbers actually reflect 6-10 Mbps up because Minnesota goals are a little out of sync with standard federal measurements. Connect MN measured access with and without mobile access as it is often considered a slightly different service, in part because of the data caps involved with wireless services. (Data caps can make wireless an expensive primary broadband connection – especially for a household.)

Learn how the other Minnesota counties rank.

How is Minnesota working to promote border to border broadband?

In 2014, the Legislature approved $20 million for broadband grants to support broadband expansion in Minnesota. You can find a list of applicants online. The hope is the broadband sector is that more funding will be made available in 2015.