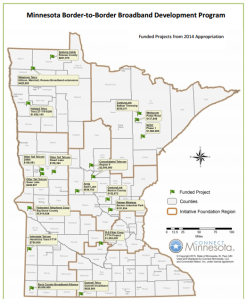 Almost $20 million in state grants have gone to 17 communities in Minnesota to expand broadband and make the case to legislators (and the general public) that such investments are wise and have a valuable Return on Investment. I wanted to delve into each project a bit to help us follow the money as it gets deployed. (See other awardee posts.)

Community and Economic Development Impact: In addition to connecting local home-based businesses and providing local online learning opportunities, this project also increases access to health care services, as there are no local health care facilities in the area.

In November 2014, Martin County was named one of 10 Blandin Broadband Communities. Like Region Five, they will be another community getting support with broadband infrastructure and adoption. It will be fun to see what the doubling up of support will mean to the community. Here are their plans based on the BBC opportunity…

“On behalf of the Martin County EDA-IGNITE, we are excited that Martin County has been selected to become a Blandin Broadband Community. Broadband is an integral part of our infrastructure for our residents and businesses. We embrace the opportunity to work with the Blandin Foundation to enhance broadband in Martin County,” said Scott Higgins, Martin County Coordinator.

Leading their work is the Martin County Economic Development Agency. Together, with educational, nonprofit and business partners throughout the county, the EDA will rally local leaders to develop a sustainable model for broadband access and use in Martin County.

Just to help track progress, here are some recent stats on Martin County: