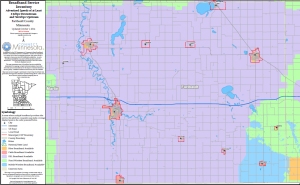 For the upcoming weeks I’m working on a County-by-County look at the State of Broadband in MN. My hope is to feature a county a day (in alphabetical order). In November, Connect Minnesota released their final report on broadband availability. Here is how Faribault County stacked up:

BEVCOMM is the incumbent service provider in most of Faribault County. I hate to say it but the maps for Faribault County are wrong. Somewhere an update was missed either on our end or something didn’t’ get to Connect Minnesota. I’m not sure if it is because the underserved is considered 10mbps down and 6mbps up. Until recently our fastest DSL speed we advertised was 20mbsp down and 5 mbps up. We have since changed the upload on that plan to 6mbps to fit into the State of Minnesota’s definition.

Also within the communities of Blue Earth, Wells and Winnebago roughly 30% of those homes are connected on our FTTH product where today we are offering speeds up to 90mbps down and 30mbps up. By the end of the year we will be offering a gig.

We are continuing to build out those communities working towards 100% FTTH. We are doing a FTTH build in Minnesota Lake starting this year. We have parts of the county outside of city limits where we have built FTTH.

My hope is that these county-specific posts will help policy makers and county residents understand where they stand in terms of broadband access. Assuming it might get forwarded to folks who don’t eat and sleep broadband I wanted to provide a little background on broadband to help set the stage…

How does Minnesota define broadband?

The 2015 broadband goal for Minnesota is ubiquitous access to speeds of 10-20 Mbps (down) and 5-10 Mbps (up). These numbers actually reflect 6-10 Mbps up because Minnesota goals are a little out of sync with standard federal measurements. Connect MN measured access with and without including mobile access as it is often considered a slightly different service, in part because of the data caps involved with wireless services. (Data caps can make wireless an expensive primary broadband connection – especially for a household.)

Learn how the other Minnesota counties rank.

How is Minnesota working to promote border to border broadband?

In 2014, the Legislature approved $20 million for broadband grants to support broadband expansion in Minnesota. You can find a list of applicants online. The hope is the broadband sector is that more funding will be made available in 2015.