Last week I attended the Gigabit City Summit in Kansas City. I’m ready to move there! And while service from Google Fiber would be nice – it’s not really a factor except that Google Fiber sparked a whole lot of community that is compelling enough to make a person move.

The question for me becomes – how can we replicate that buzz in Minnesota? (Spoiler alert – to be unique I think we ought to focus on statewide goals, not just local community goals!) 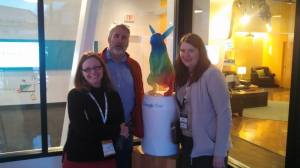 First – what is the buzz?

It’s part established assets like the University and the Nelson Atkins Art Museum. It’s part new assets like the Kansas City Startup Village, an effort in an area where housing was cheap and homes not always well-maintained. Entrepreneurs started to move in – to live and work. One example is the Home for Hackers. Founder Ben Barreth bought a house, the community fixed it up and now hackers are welcome to live there rent-free for three months with access to Google Fiber. Apparently about 30 hackers have come to stay and about 40 percent have ended up staying in the area. (I didn’t meet Barreth but – it sounds like he’s a regular guy with four small kids who had a vision to “give now, get later.”)

KC has a program (LaunchKC) that awards funds to entrepreneurs with good ideas who will move to KC. KC Digital Drive have a Playbook that helps a community better use technology for education. Government, health care and economy. Mozilla has brought their Hive Learning Networks to the community spurring events like Maker Parties and increasing digital literacy and skills. Code for America had a strong presence (in the community and conference) promoting civic engagement and US Ignite was promoting doing things different (not just faster) with a Gig. So many interesting and energizing things happening.

Technology is the excuse but community is the end game. 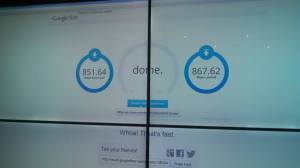 Second – can we create the buzz without Google?

Google released their list of Google hopeful communities a year ago. (Apparently the list of final cities is coming soon!) Minnesota did not make the list. So we better find another way. One of the non-Google providers at the conference remarked that many communities do not trust their incumbent providers despite the fact that often they are the most likely partner and have probably already invested boatloads of dollars in infrastructure. In Minnesota I’ve seen communities where the relationship between the city, the citizens/business and local provider is strong. (Lac qui Parle and Federated comes to mind.) And I’ve seen areas where there do seem to be trust issues. (East Central Minnesota.)

Third – how can we support deployment?

Former KC Mayor Joe Reardon talked about how he worked to get Google to the area and then how he worked with them once they started deploying. He pointed out that fiber isn’t politics but policymakers play a role. In Minnesota the role might be to provide enough funding to spark the conversations that Google sparked in KC. (Just look at the list of providers interested in the $20 million appropriated by the legislature last year!) 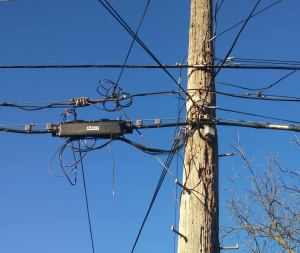 Quick aside: Policymakers might also look at any regulations that serve as barriers to deploying fiber. President Obama may have made that conversation mandatory with his speech last week asking the FCC to look at regulatory barriers stopping municipalities from getting better broadband.

Fourth – will that be enough?

I think technology is necessary, but not sufficient. To be practical I think fiber technology is aspirational, but not realistic for much of Minnesota (today). So I think we move toward the better solutions with technology and throughout the community. Boyd Cohen, a leading expert on Smart Cities show us his Smart City Wheel. Technology plays a role but so does: Smart People, Smart Economy, Smart Environment, Smart Government, Smart Living and Smart Mobility. Technology can help us be smarter in all of those areas. We need to look at technology as part of the solution – not a problem. It’s an investment. It’s our foundation. But we need to know how to use it, which means everything from closing the digital divide to help more people make use of the network to opening up the data and the technology so that technologists can streamline processes and innovate solutions – which should reduce community costs and create economic opportunities.

Fifth – can Minnesota do this on a statewide level?

Joe Reardon also talked about fiber being the foundation of the future and a unique economic development tool. Traditional economic development, he noted, was a game of natural winners and losers. The new factory locates in KC Missouri or KC Kansas. The two Kansas Cities become competitors. In the new economy the best jobs can come from anywhere – often from the basement or garage of local citizens. And Metcalfe’s Law demonstrates that the more people connected, the greater the value. Working together, the two KCs can work together to build better infrastructure for their shared economic development.

So maybe there’s room for the whole state of Minnesota! There weren’t many very rural communities at the conference. (Nor were there very many Minnesotans – but that’s a different, more shaming post I’ll just write in my head! I will give props to RS Fiber for being there and being the one Minnesota community listed on the Next Century Cities roster – a roster mentioned by Obama.)

Back to MN, we have a lot of unique assets. In his speech, Obama talked about pluck as what differentiates Americans from the rest of the herd. With pluck we can again become winners in the broadband innovation game. Minnesotans have pluck. Folks at the conference were impressed with our unusual array of plucky assets –the BWCA, Mayo Clinic, universities, St Paul Winter Carnival, Trampled by Turtles, Crashed Ice and Flutag events. We just need a cohesive plan to get the conversations going about fiber to build community. Succeeding on a statewide scope would make us unique.

I’ll end with a conference highlight for me – listening to the optimism of Susan Crawford. I’m a huge fan and I have never heard her be so enthusiastic about the future of the US and fiber as after’s Obama’s speech. At lunch she allowed that her was very serious about making things happen.