Broadband Search looks at cost of broadband around the world. They make a lot of comparison based on location but in the end here are some core facts: 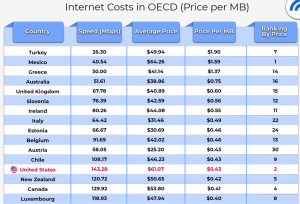 So, US is expensive but good broadband. The article points out that you might expect different results from a country that claims to be the most developed, richest and most free capitalist market in the world. They offer reasons why costs in America are so high:

With so much federal and state money going into broadband right now, it seems like a good time to take a look at these issues.