Through RDOF LTD Broadband was deemed eligible to receive $1.32 billion in the US, including $312 million in Minnesota to build FTTH to unserved locations. There is some controversy about that decision – but this post isn’t about LTD, it’s about the maps.

Looking at maps where LTD is eligible to received funding, there are some surprises. For example the Vikings Practice Facility shows up as eligible, as does Henry Sibley High School, lots of locations along the highway and spots in commercial portions of suburban Twin Cities – just feet away from areas that were served. And then there are areas where locations seem to be on or under the highway. 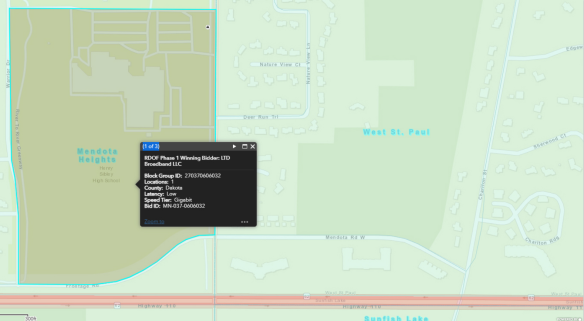 Census block: 270370603011
65 locations
potential annual award: $4,270.70
Notes: locations include businesses such as Sportman’s Guide an off and online camping store, parts of BridgePoint Park, a planned industrial park, So St Paul Steel – these places are couched between businesses served by Xfinity.

We need to demand better broadband maps before we invest more government money based on existing broadband maps. You can start by contacting the FCC or your policymakers – some have already made strides to get FCC to improve the maps.