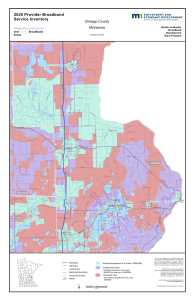 Annually, Blandin Foundation pulls together data from the Minnesota Office of Broadband Development and broadband news to gauge progress toward the state broadband goals (25 megabits per second download/3 Mbps upload by 2022 and 100 Mbps/20 Mbps by 2026). Leaders can use this information to improve broadband access and use in their communities. To see how the state is doing overall, or to compare counties, visit the Blandin Foundation interactive map. Or check out past years’ reports: 2017, 2018, 2019 and 2020.

Like several other counties, Chisago County has areas where there is one national provider (or another). That can lead to bottlenecks when trying to get upgrades, but Chisago has found creative ways to work with national providers to get Border to Border grants to match federal funding. Border to Border grants require projects to build to higher speeds; the federal funding only required 25/3 Mbps and sometimes only as low as 10/1 Mbps. Chisago area has benefited from two grants in that model and a third was just funded in the last round. They are building a momentum for continued improvement.

Chisago County residents spoke with Blandin on Broadband about the impact broadband had on their ability to deal with COVID. (See video below.) The response was mixed because some residents are well served, and some aren’t. That leads to a local digital divide but that also means that the county (especially schools) needs to do things differently to accommodate both sides, which creates another level of digital divide when compared to counties that have ubiquitous coverage.

What we learned in the past:

In 2018, a Blandin Foundation report looked at the impact of Federal CAF II funding in two towns in Chisago County. The study found that while some areas were upgraded beyond 10/1 Mbps; some remain at speeds that do not meet the 2022 nor 2026 MN broadband goals. With these funded grants, Chisago found a way, in at least some areas, to encourage providers to build to higher speeds; the state grants that require higher speed buildouts.

Chisago remains focused on improving broadband in their area. In the last year, Chisago broadband advocate Nancy Hoffman received an honor from the Blandin Foundation. The County and city of North Branch were named Minnesota Telecommuter Forward communities, which means they promote broadband use. Also, they will benefit from CenturyLink’s successful application in the last round of Border to Border grants:

Is broadband a help or hindrance in dealing with COVID?
Chisago County met with Blandin on Broadband to talk about how their broadband situation helped or hindered the ability to deal with COVID restrictions.

The short answer is that it has been both. It’s a help where they have it and a hindrance where they don’t.

They have enough residents without access that they shaped plans around the divide. In the video you’ll hear the story of the have and the have-nots. Two were able to work from home without issues. School was possible. It might not be their top choice, but everything worked. For the other, his son missed classes due to outages in the spring. Trying to work from home, he found that his 25/1 Mbps access was not adequate and he was frustrated because that connection had recently been upgraded with federal funding and was still too slow to meet their needs. Neighbors down the block are less lucky.

The schools did what they could to support students with devices and even mobile hotspots to use at home; unfortunately, hotspots did not work for all households. Some are out of cellular reach.