Roberto Gallardo has a new research report on Gauging Household Digital Readiness. I spend a ton of time focused on access – but as a librarian, I have been worried about readiness (information has morphed into digital) for decades. Access is a piece of digital readiness but as Roberto points out – it only a piece.

Here are the key findings from the report…

I am most excited by the final point – the focus on digital resourcefulness and utilization. Because that’s when technology changes from being a challenge to a solution. It’s like the change in grade school, when kids go from learning to read to reading to learn. A world opens up! You need to have access, you need to have devices that work – but that’s technology. A big enough check will take care of that. Resourceful and utilization is all people. 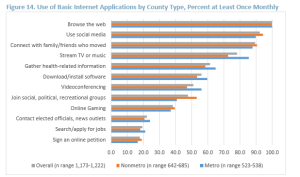 Also interesting to see who saves money and who makes money online. Non-metro people seem to make less money freelancing; I wonder how much of that is attributed to Uber/Lyft. Whereas non-metro households earn more in rent. Maybe that’s Air B&B – certainly that could be true in some of Minnesota’s lake areas. Non-metro households also report greater savings with online healthcare.

On top of  being an interesting look at what people do online I think this report does help propose some options to encourage greater use. First non-users can see how much is to be gained by moving some activities online but also digital inclusion professionals can focus on getting beyond that learning to read stage to encourage greater satisfaction and stronger desire to learn more. It reminds me of one of my favorite digital inclusion activities – the scavenger hunt. Get people to travel the city of town using online apps and other tools for prizes. Encouraging resourcefulness and utilization!