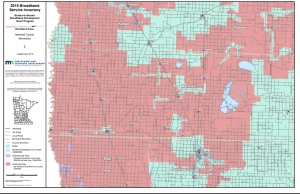 Marshall County broadband ranking has improved from 78 to 54. They’ve seen great improvements in speeds of 25/3 and 100/20. AT&T has been investing in the area. They got a state broadband grant (via Wikstrom) in 2015 for $425,000 and Wikstrom received another $43,000 the following year. And Wikstrom got another $1.3 million in the last round of grants…

Wikstrom Telephone, Wiktel NW MN Broadband – $1,307,785. This project will serve rural sparsely populated areas in Kittson, Marshall, and Roseau counties in far northwestern Minnesota, passing 300 unserved homes and 31 unserved business locations. In a funding partnership with the State of Minnesota, Wikstrom will improve broadband services levels to 1 Gbps down and up, exceeding the 2026 state speed goal, on a fiber optic network, and in some locations will extend the service from routes built via the 2016 Border to Border State Grant program

Broadband is a hot topic at local meetings…

Wyatt-Yerka said, after listening to the small-group part of the program, that audience members had some of the same concerns as many people in the region. Getting more reliable broadband Internet access was one of those concerns. Wyatt-Yerka said some of the problems in getting broadband in the region had to do with cost, and while there were state broadband grant programs, the fees to apply could be a deterrent. He suggested decreasing the application fees.