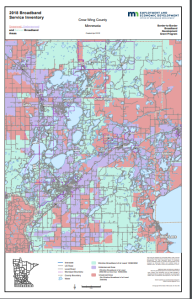 Crow Wing has moved their ranking up from 63 to 61.

Mille Lacs Energy Cooperative received $15,000,000 loan.
This Rural Development investment will add 575 consumers, build 42 miles of line, improve 38 miles and make other system improvements. The loan amount includes $2,961,860 for smart grid projects.  Mille Lacs Energy is headquartered in Aitkin. It serves about 15,150 consumers in Aitkin, Crow Wing and Mille Lacs counties.  The economy of the territory is principally based on tourism, recreational activities and light industry.

Crow Wing County was one of the communities we studied last fall for the Measuring Community ROI report. We looked at the community investments and results…

The following public investments have been made:

Using formulas devised to measure impact of broadband access Crow Wing has the potential to realize: