The University of Wisconsin Center for Cooperatives has published an in depth report on what’s happening with broadband and cooperatives – especially in Wisconsin – but they use one Minnesota example (Arrowhead Electric Cooperative) and regardless of location, the driving factors leading to the need and opportunity for a coop to provide broadband is similar.

The report provides a number of examples of what cooperatives have done. In the end, they determine there’s no one-size-fits-all solution but I think the range of solutions included are helpful to anyone in a cooperative looking at their options or anyone looking to persuade a cooperative to look into providing services in their area.

I’m just going to outline some of their high level observations.

Why would a cooperative get involved in broadband?

There is a perceived connection between potential for future community and economic development and access to broadband. A National Agricultural and Rural Development and Policy Center publication concluded that rural median household income grew at nearly twice the rate where broadband technology was adopted in households compared to where it was not adopted. 1

Unmet infrastructure need in rural communities is the major reason both telecommunications and electric cooperatives were organized in the early part of the 20th century. The business model which drove investor-owned firms did not support the capital intensive investment required to develop infrastructure in sparsely populated rural areas. Cooperatives were developed to meet the demand for reliable utility services that, both then and now, are critical to modernization, innovation, and future economic development in rural areas.

How can it make financial sense?

According to the National Rural Electric Cooperative Association, 42 percent of the nation’s electric distribution lines are owned by electric cooperatives. These lines cover 75% of the U.S. land mass to reach just over 12 percent of the nation’s meters, an average of 7.4 customers per line mile. This is much lower than investor-owned utilities, which average 34 customers per line. Public owned utilities, or municipals, average 48 consumers per line mile.20 Because electric cooperatives are organized and operated to provide service to member-customers rather than a return to investors, they have been able to develop and maintain the infrastructure to serve rural, sparsely populated rural areas.

How does it serve the mission of an electric cooperative to provide broadband?

Electric cooperatives’ primary mission is to deliver electric service to member-owners in a financially responsible manner. Boards setting the strategic direction for the cooperative have the fiduciary responsibility to assure that mission can be met into the future. However, as the necessity of broadband access grows, the lack of high speed internet is increasingly a problem for members.

In addition, technological changes that are affecting the architecture of the electric grid increasingly are making questions about broadband access more directly relevant to the electric cooperative’s own future operations. By upgrading the communications technology that is part of the cooperative’s electric infrastructure, a “smart grid” will allow cooperatives and their members to better manage energy demand and distributed energy functions that allow customers to contribute to the grid.24 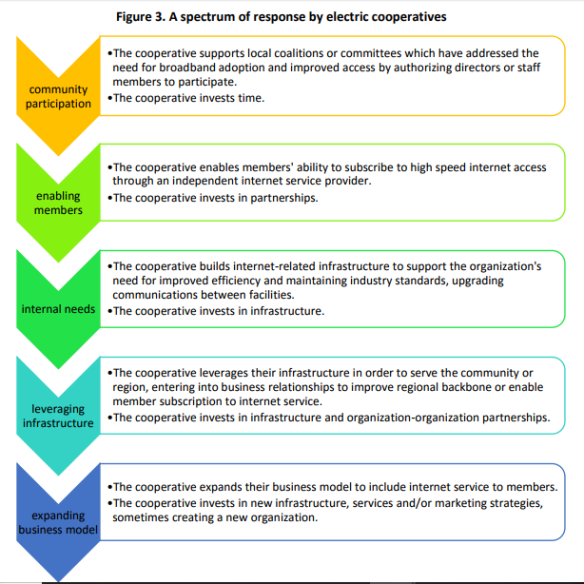 1. Create a sense of urgency

3. Form a strategic vision and initiatives