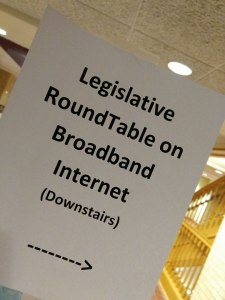 I’m on the road this week with Bill Coleman talking to regions about broadband. We started last night with East Central RDC. My first lesson? I’ve heard people say that broadband is losing headlines with legislators and that it feels like old news. Well it’s not old news on the front lines! There were 60+ attendees to a meeting that started at 7 pm. (And eventually the custodians had to kick us out!) Attendees included Representative Jason Rarick, Senator Tony Lourey, Senator Mark Koran, Representatives from Senator Klobuchar, Congressman Nolan and Senator Smith.

People are there because they recognize that if they don’t get better broadband their community is in jeopardy. The counties in the region are at various stages of seeking better broadband – as someone said, they no longer need to discuss why broadband – it’s how. People spoke up about the need for continued funding for broadband projects, the need to transform federal funding and a new look at the role of cooperatives.

We got to hear real numbers from real feasibility studies (88 percent of residents in Isanti County want better broadband) real costs (the business in Kanabec County was quoted $35,000 per mile to upgrade to fiber) and real stories (the business that loses $35,000 per minute when an employee loses connectivity). You can see the presentation, video archive and my notes below. (I apologize for the coughing in the video – bought some cough drops for today’s meeting!)

Notes – (sorry didn’t do much clean up, you can cross check with video)

With the help of the Blandin Foundation we have been working on better broadband for a few years. Once we started working on it, we heard from local businesses. We had programs that provided WiFi in the area, business marketing places, outreach and marketing. We did a survey; 900 people responded. We looked at why Chisago County needed better broadband.

Got 2 MN broadband grants: one in Sunrise Township with CenturyLink and one in Fish Lake Township, which will go in around 2019. Need to have township boards and residents who really want broadband.

We wish we knew where CAF II funding was going so, as a community, we could plan.

We have talked to providers; we are looking at wireless due to costs.

We’re working in North Branch – the problem here is too many providers and providers offering different options. We’re trying to get Mid Continent to go into more areas as the place where they are have been happy.

Schools in East Central formed a cooperative (ECMECC) to do two-way video done through cable. 12 years ago they needed to upgrade. TO get federal funding, the schools need to do an RFP. MidCo got the contract and that got them engaged. The kids are well connected at the school – but the homes are not necessarily connected. There are areas where MidCo doesn’t go and CenturyLink isn’t meeting the needs. We have town hall workers who can’t get online at the office. SCI has done a good job in some areas.

We have residents to drive to the Twin Cities to work; they should be able to telecommute.

The cities seem to have access – they problems is the no man’s land between cities.

It seems like private companies need 15 households per square mile to get necessary ROI.

I’m worried about the kids who live in the areas just out of range of broadband. The libraries are full. The coffee shops are full. They need access. Pine Tech has a computer lab because so many students don’t have access at home.

We have been trying for years. We don’t’ have a local operator and that’s our problem. CenturyLink is our incumbent. CAF II is making things worse. They serve some people not all, but cherry pick so that we lose aggregated needs. Communities that get good broadband have – a rural businesses that can afford (rich farmers) to aggregate demand, higher population density, a local provider or a population willing to tax itself to pay for broadband.

Local elected officials are making broadband their platform – as have many others. The problem is right now we can only .

The Internet was supposed to be a uniting source – it’s become a divider. The haves and the have-nots.

What do we need from legislators:

Need to encourage incumbents to let us buy access.

Started with a feasibility study in 2015. We used it to work with a private company. Our county is skinny and flat. We got a grant from Blandin to study more with public awareness, market research and tower research. We looked at a fixed wireless/fiber solution. We used social media and direct mailing. (Lots of our residents can’t access broadband or choose not to use social media). 70 percent of those asked through their broadband was poor. This program was going to serve thousands of households. We focused on rural areas for our grant application – but we didn’t get funding. We have been asking about why we didn’t.

We think this is a good solution for us and we’re still thinking that.

Broadband is the top legislative issue for our County. We need greater funding if we want to live long enough to see broadband in our lifetimes.

We are hoping to release out broadband study in March. It is full of stories of frustration. People having trouble. People having to move. 88 percent of residents (and 83 percent of businesses) say they need better broadband. 75 percent said redundancy was important to them. 60 percent of respondents spend more than $100/month for broadband. We’d like to see some of that money stay in the local economy. We are looking at fiber to towers at intervals that allows for meaningful options where FTTP may not make sense.

The cooperative is the preferred model to the community. It allows for less rigidity in barriers.

A nursing home is $8000/month/resident. Broadband can keep grandma at home. So why not spend the money on broadband at home and keep her at home instead of nursing home.

Keeping people in homes longer is a great use of broadband – and a great cost saving strategy.

I recently spoke with policymakers in DC. They were all open to listening.

As partners in local government, we are figuring it out.

Nice to have $20 million in grants last year – sad to have $50 million requested.

The Governor Task Force is recommending $35 million per year for broadband.

We have CenturyLInk to our house and Verizon hotspot. My husband and daughter work from home. A week ago – CenturyLInk went down; turns out Verizon was out too. So the daughter went to the coffee shop to work, which is OK when she teaches kids. But the husband works for US Bank – downtime due to broadband costs them $35,000 a minute.

Our demands are growing and growing. We need to look at economies of scale. We need a plan. We need the true costs – at least for our regions. You have my commitment.

You can’t even be a good consumer these days without broadband.

I learned so much. I like the cooperative model. Much of the state funding has gone to cooperatives. Local folks work hard to get it right. When tax dollars are paying for fiber we need to look closer at ownership.

Broadband is important for business. We need to look at upload speeds – download is consumption; upload is production. We have a productive community. Reliability is important. Our kids are at a disadvantage if they don’t have broadband at home. Glad to see townships so engaged. We need to engage now or be left out. The people who don’t get service will be the poorest communities with least population. We’re going to have to deploy broadband and it’s going to cost money.

I’ve been to many of these meetings. Seems like a cooperative is a good model for rural broadband. Cobank lends to cooperatives. That could be a help.

My wife is in school – our broadband went out today and my wife had to go 4 blocks to school. I can only imagine what it’s like in other areas. Technology is the future. Broadband is the Senator’s top priority.

Klobuchar was founding member of broadband caucus. She wants to make sure that broadband is part of any infrastructure bill. I was at a meeting lately where some policymakers thought that there should be on state funding for broadband – so we need to know that view is out there.

How much do people pay in Istanti County? Individual broadband bills in Isanti County total $1.062 billion over 30 years.

The people who have good service aren’t here. Once the critical mass gets.

We need to dispel the myth that 5G will help rural areas. We need to keep raising up these issues. We need to sell broadband to everyone.