They did benefit from a Border to Border grant in 2014…

Otter Tail Telcom, Stuart Lake. Awarded $105,364 to expand existing infrastructure to bring fiber-to-the-home service to 47 unserved locations, including 46 homes and one business near Stuart Lake, just north of State Highway 210 and east of Fergus Falls (between Clitherall and Vining). Total project costs are $210,729; the remaining $105,365 (50 percent local match) will be provided by Otter Tail Telcom.

Community and Economic Development Impact:Fergus Falls calls itself the “telework capital of Minnesota.” This project will continue the build-out in and around Fergus Falls to make that goal a reality for a growing number of people living, working, and operating and/or starting businesses in the Fergus Falls region.

But apparently the impact hasn’t yet been felt. The local paper recognized the need for improvement in last fall (2016)…

The county has some catching up to do. Currently, Otter Tail is the fourth-worst in the state when it comes to fixed, non-mobile broadband internet service speeds, ranking 84th out of Minnesota’s 87 counties.

And they talked to local providers about the situation…

In an email to the Focus, sources at Arvig said these broadband goals are realistic and possible, but are also “very expensive to accomplish,” and funds allocated by the state to meet the goals “don’t come close to covering the costs of making it a reality.”

Arvig, based in Perham, is one of Otter Tail County’s major broadband providers, serving about one-third of households and businesses throughout the county. Currently, the company is capable of providing broadband speeds of 100/20 Mbps to 20 percent of its service area.

Other broadband providers in the county include Charter Communications, Otter Tail Telcom, Park Region Telephone Company and a handful of others.

With inadequate federal and state funding, Arvig said, “constructing the infrastructure required to provide these types of speeds to a relatively sparsely populated area” gets too costly.

What’s more, most customers aren’t asking for these high speeds.

“We pay close attention to what our customers want and we really don’t see much demand for speeds of 100/20 Mbps in Otter Tail County,” according to the Arvig email, “as evidenced by the fact that 70 percent of our customers remain on the lowest speed package available.”

They did receive a Border to Border grant earlier this year; hopefully that will bring them closer to the broadband goals…

Otter Tail Telcom was awarded $517,441 as part of 71 grants issued for Greater Minnesota…

The funding will assist with access to high-speed internet in the Fergus Falls and Battle Lake areas, according to a press release from DEED.

The project in Fergus Falls will provide service to 79 unserved households near Elizabeth and rural Fergus Falls. The total eligible project cost is $558,542, with $279,271 local match.

The Battle Lake project will serve 62 unserved households in the Clitherall and Battle Lake areas. The total eligible project cost is $476,340, with a $238,170 local match.

Fergus Falls (in Otter Tail County) has been very active in promoting telework. They have a telework guidebook for other communities. In 2013, Fergus Falls received National Recognition as Smart Rural Community.

Otter Tail County is in line to receive $1,421,898 in CAF 2 funding to upgrade 3305 locations. CAF 2 recipients are only required to upgrade to 10/1 access. Many may choose to upgrade to better speeds but there are no requirements. Numbers:

The Office of Broadband Development released data on broadband covered in fall of 2016, based on information gathered in July 2016. Here’s how they ranked: 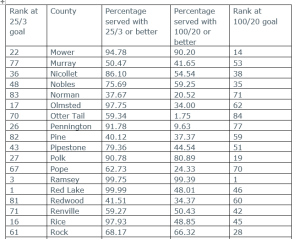 Mississippi State University Extension have come up with a ranking system to gauge the digital divide index (DDI) by county. (The lower the number the better – the state average is 40.66.) Here’s how they ranked: