The locations of the up to 600,000 homes and businesses nationwide targeted to get broadband access for the first time through the FCC’s Connect America Fund are now available on an interactive map at http://www.fcc.gov/maps/connect-america-fund-phase-i-round-two.

Last month, the FCC announced that providers in 44 states and Puerto Rico had requested over $385 million from the Fund – which will be matched with hundreds of millions of their own dollars in many areas – to quickly expand broadband infrastructure to rural communities in every region of the nation. The new FCC map zeroes in on these locations down to the census block level and zooms out for a big-picture overview of this major broadband expansion at the county, state and national levels. 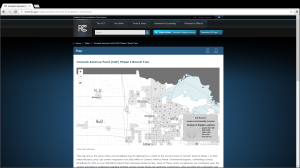 You can see the areas in Minnesota that are on deck to get broadband in the map above. I’ve also listed the counties and companies getting funding below – very high level information. There’s also a spreadsheet with greater detail.

1 thought on “Who is getting broadband due to CAF in MN?”