Yesterday I spent the day watching the Broadband Task Force meeting. It was interesting. The morning was really spent figuring out the rules they need to follow to be compliant with Open Meeting laws and Data Practice regulations. The most striking aspect was how the regulations do not fit with existing technology. The public policy ethics are way behind current technology.

The afternoon was spent looking at three things:

And finally making a schedule for future meetings (though the end of the year).

So that’s it in a nutshell; you can read on for more complete details.

Need to be in compliance with Open Meeting law. Here are the steps we need to take:

Can post agenda in advance.
Need to be open to public.
Need to post agendas and minutes (like the school boards)
Can’t be private meetings with a quorum.
No private posts of a public nature.
Board member to member emails on topic would be public according to data practices law.

Need to leverage technology to facilitate work.
Technology is ahead of the law. Want to use teleconferencing/webcasting to reach rural members .
How do we keep trade secrets yet make info available? Company aggregates data in such a way as to retain as to not give away secrets. 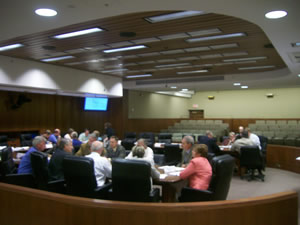 How to use the web site? Advice is to not use web site as a forum because that would mean the forum become a 24/7 public meeting. So people can post questions but members cannot interact. So, members are welcome to start a blog (probably based on the fact that Mike O’Connor already has a blog.)

There shouldn’t be a member-only portion of the site.

Getting outside speakers – one issue was that outside people (people teleconferenced in) could listen but not interact. They are working on fixing that.

[Ann’s note: wow, the State needs a tech circuit rider to help with processes!! And they need it soon. One big issue was – could the members use the “reply all” email feature when getting notes to start or continue a conversation. I guess the problem is that then is that the meeting notes might be out of date if the meeting has continued via email (to a quorum). But even as a former librarian I have to say that documentation shouldn’t get in the way of progress. Maybe they could move their email list to an online form. Maybe reports could be written through a Wiki. If it helps, maybe they could archive snapshots of these tools periodically. I’m sure there’s a better answer but even I can come up with something in 5 minutes. Clearly many of these members are frustrated by these rules.] [Ann’s added note: Someone just suggested a Wiki. Woo hoo!]

Excellent point of the day: How come we can’t show up by video when prisoners going through trials can show up by video? The legislature has decided that those prisoners can be slighted to save time and money but the Broadband Task Force can’t convenience to the same end?

Work done in small groups should not meet a quorum because it won’t be recorded. But since it doesn’t meet a quorum (A quorum is 5 people.), it does mean that experts are welcome to get paid to attend.

They would act as if the Open Meeting Laws apply. But acting as if and really applying are two different things. I just see the loop hole building. I think this is a time when we’re trying to make a right with 2 wrongs. I feel as if they are doing it for the right reasons but the best laid plans…]

30-40 people are on the email newsletter
They are allowing a uni-directional forum (only the public can post); members cannot reply

LUNCH – after lunch the members got into small groups and addressed the following topics:

[Ann’s note: I overheard nice things about the Blandin meeting in Rochester yesterday – although the person observed that the providers are more interested in broadband than the economic developers – because the economic folks don’t want to know the details; they just want everything to work.]

What do we want to see happen or learn?
Fundamentals of the internet/broadband – how does it work?
Where are we today?
Where is it available, what speeds, what costs? What do the incumbents’ road maps look like?
What does the State budget look like? Is there alternate means? What is happening in the markets?
Where is economic development going?
Where are in terms of education? How are we promoting broadband use?
What are other states doing?
What opportunities are out there?
What are the applications that people are doing with high bandwidth?
What is the demand?
What’s up with Interet2?
Folks would like to see this stuff.
What’s driving the exaflood?
What is the regulatory policy/procedures? What are the legal issues? (How can we avoid another Monticello?)
What resources are out there to support the effort? (Blandin was mentioned as an example – I didn’t make that up!)
Who’s doing research on broadband in the State?

Statement of values – who is MN and what do we want to be?
Where we have been – give the history of telecommunications and related items in the State
Where we are today –
Where we want to be – set goals
Define broadband by functionality
Policy recommendation & how we can pay for it
The object is to educate and sell Broadband

Use California as a model
Nice graphics, charts..
Need funding to produce
Include a glossary
Use mapping report
Break work up into small teams
Get a style guide
Create templates
Get started now (Toward that end they did start with some assignments.)

October 24 – Internet Fundamentals
November 14 – Style guide discussion; where we’ve been – history of Internet/broadband in Minnesota, network development
December 19 – where are we now; look at other states and countries

My final hope – that they tape at least at least the educational portions of the meetings to help others (especially any interested legislators) learn more! Heck I’ll bring my camera if it’s easier and OK to have a unofficial version.